If you have been using a PC for gaming, the odds are high that at some point in time you’ve run into compatibility problems with your favorite games. Of course there is always an easy fix by installing Windows 10 on top of your old operating system but now it’s possible to avoid this issue altogether and install Android apps on Windows 11-an exciting new feature from Microsoft. 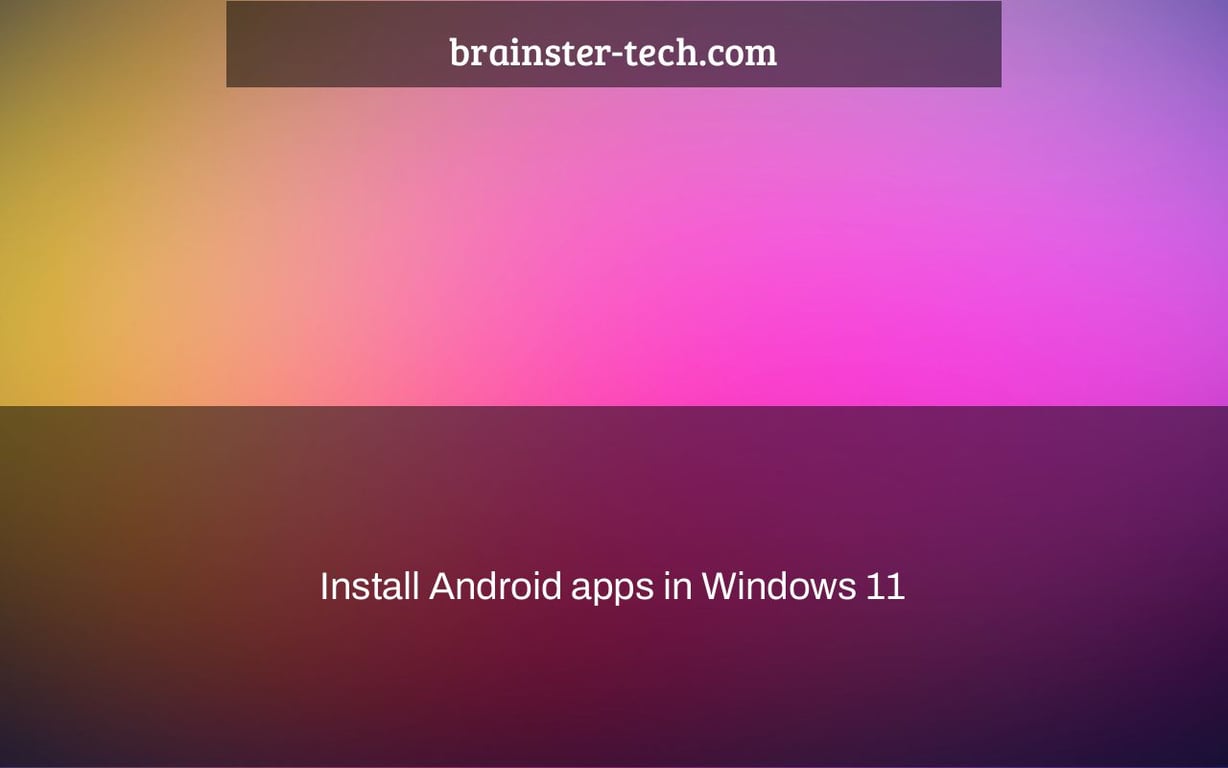 Support for Android applications, which can be readily installed on the system and utilized as if they were true PC programs without the need for specialist emulators or virtual machines, is undoubtedly one of the new Windows 11 features that sticks out. This feature may be highly handy for testing out new applications for phones and tablets, or (as Microsoft intends) for providing vital assistance to Android developers who can now create on Windows 11 and quickly test their app inside the operating system.

In the guide that follows we will show you how to install android apps on windows 11, avoiding the use of procedures that are too complex or difficult to apply in the home. If the recommended tool for Windows 11 is not enough for the purposes we have set ourselves, we will also show you how to install the best emulator for android, so as to get even more functions (even on Windows 10) in addition to support for the Google Play Store.

Information that is preliminary

Windows 11 is the Android app.

Now that we have the system set up we can APK di Android on a PC with Windows 11. To proceed we open the Start menu, look for the Microsoft Store app and start the search for the WSATools tool, which greatly speeds up the installation of Windows Subsystem for Android and Android apps.

At the end of the app installation we open the Start menu again and look for the app WSATools. We will find ourselves in front of a simple interface, where it is sufficient to press the button Select APK (The Select an APK), browse the system folders where the APK we want to install on Windows 11 is present and, as soon as the interface allows it, press Install to add it to the system.

If the app is compatible with “smooth” Android (i.e., without Google applications or Google Play Services), we can run it just like any other Windows program: enter the Start menu and run the APK-installed software to display it in a smaller window (about the size of a modern smartphone).

An even better program for installing Android apps in Windows 11 is WSA Pacman which you can download for free from Github. WSA PacMan is a GUI for ADB commands and is based on the original Android Windows Subsystem environment and allows you to install apps via APK files quickly and easily.

Where can I get the APK files?

Where can we get APK files to install Android applications on Windows 11? APKMirror is a fantastic place to start since it has almost all of the APK files for programs accessible for free on the Google Play Store.

To download the APK apps from this site we use the search engine above to help us find the right app, press on its name, click on the button See Avaible Downloads and download the latest release of the APK by pressing the arrow key. In the new window that opens, click on Download APK to start the download; at the end, just open WSATools and proceed as seen in the previous chapter.

Although APKMirror is a safe source, always be cautious and scan APK files for viruses, especially if we also use other sites or other sources to obtain APKs.

BlueStacks is the best alternative.

If we have Windows 10 as an operating system or we want to use an emulator with the integrated Google Play Store we can always install the program BlueStacks, in our opinion the best method to install Android apps on Windows.

We will have a true platform to launch any Android app by downloading it straight from the Google Play Store, even paid applications, after we install this software (by adding a Google account and a compatible payment method). The BlueStacks applications may be added to the desktop and accessed as shortcuts inside the Launch menu: in reality, the Android apps will be shown alongside the Windows programs, and we will be able to start them without problem.

BlueStacks also allows us to manually install APKs, allowing us to add programs that we have obtained from the Internet or that we have created.

This great emulator for android was born to run game apps on PC, but nothing prevents you from installing other types of apps as well, such as WhatsApp your PC, Telegram o Messenger.

Support for Android apps on Windows 11 is currently experimental and reserved only for subscribers to the programma Insider Preview, without forgetting that it is also necessary to launch commands from the terminal in order to get full support for all apps. Instead, using a simple tool like WSATools we can immediately install the Android apps on Windows 11 without having to start the Insider Preview program and without too much tweaking, so that even inexperienced users can immediately try this interesting function of the new Microsoft operating system.

If we want support for the Google Play Store or want to try Android apps on Windows 10, we recommend that you install Bluestacks mentioned above, which remains one of the programs to install Android and its apps on Windows PC or even i best android emulators.

We haven’t installed Windows 11 yet due to compatibility issues? You will be pleased to know that, on our site, we can find a detailed guide for install Windows 11 on older PCs, bypassing all the checks provided by Microsoft.

Can I install Android apps on Windows 11?

A: No, Windows 11 does not allow you to install Android apps. However, there is a free application called Google Play Link Creator that converts links from the internet into downloadable files that can be installed on your PC with Windows Media Player or iTunes.

Can I install APK in Windows 11?

A: You cannot install APK on Windows 11, however you can sideload Google Play Store and other app stores.

How do I install Google Play on Windows 11?

A: To install Google Play on Windows 11, you must first download and run the setup file. Once downloaded, close any programs that are open. Double-click or right click on the installer to begin installing it.