Your headphones allow you to listen to music or watch movies privately, but sometimes having both sources playing at once can be visually distracting. Here’s a simple way to combine the two audio sources into one headphone with your phone. 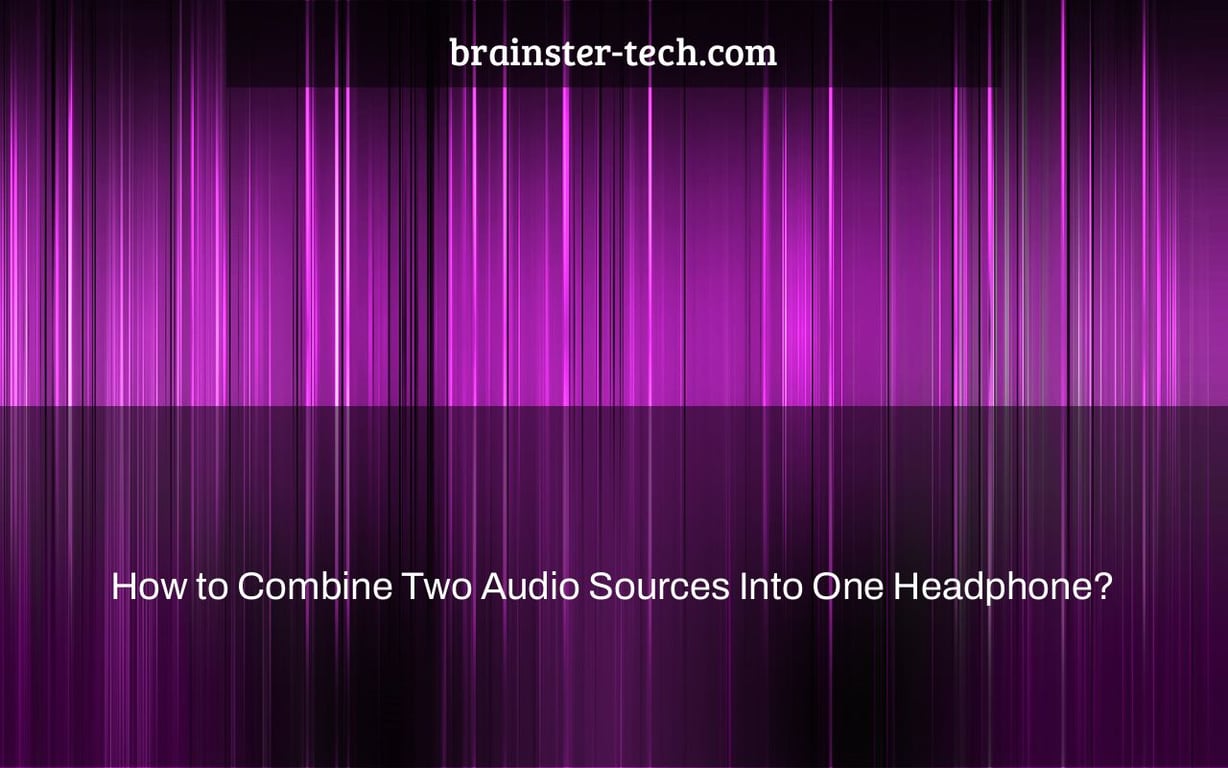 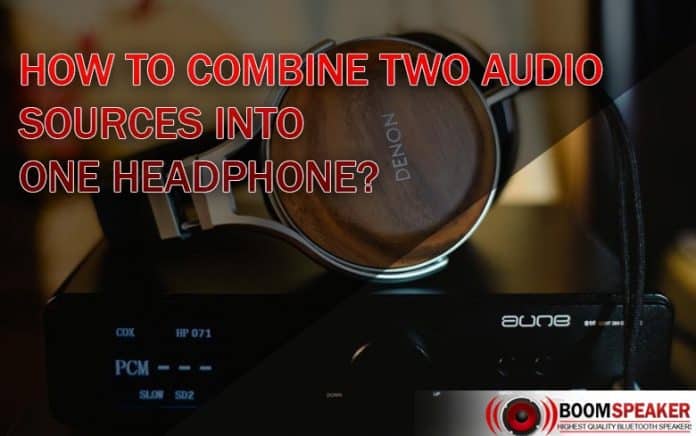 We earn money from qualifying purchases made on our website as an Amazon Associate.

What if you could mix the sound of two separate audio sources into a single pair of headphones? This would allow you to listen to both audio streams at the same time without having to flip back and forth between them.

Let’s imagine you have a gaming console and want to listen to audible podcasts from your PC while you’re playing. How can you merge the audio from your game console and your PC into a single pair of headphones? Perhaps you play the guitar and want to merge the sound of the guitar with the music you’re listening to.

A stereo mixer is the simplest technique to combine two audio sources into one earphone. A inexpensive second-hand mixer may be found at your local audio shop or in the classified ads.

How to Merge Two Audio Sources into a Single Headphone (Two Sources, One Headphone)

People who need to keep linked to their business and personal life at the same time may find this handy.

To merge two audio outputs into one, follow these steps:

There are a number different methods to connect two audio sources to headphones:

The first option is to use a mixer.

A basic mixer is a simple approach to combine two audio sources into one earphone. Behringer mixers may be found at a low price in your local audio shop or on Craigslist.

All you have to do now is make sure the mixer has two stereo channels (don’t purchase a mono mixer!). The Rolls MX42 Stereo Mini Mixer, which is available on Amazon, is a nice example. 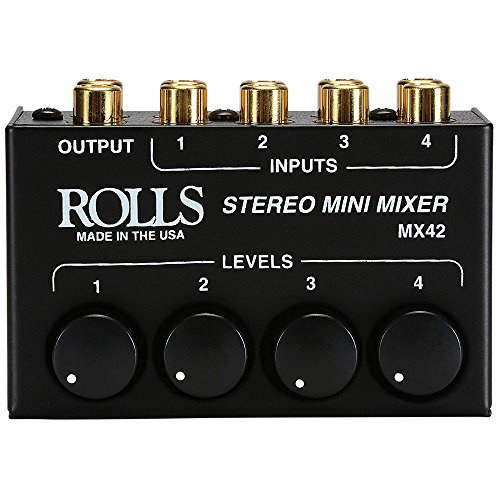 You can regulate the sound levels of each audio source using a mixer, which also has an output so you can hear both audio sources at the same time.

All you have to do is use a single headset to connect the headphone outputs of up to two devices. If you want to play a game on a console while listening to a podcast, you may connect both the console and the computer into the mixer and have one headphone out.

Using a Headphone Splitter as a Second Option

A headphone splitter is a device that splits an audio signal into numerous outputs from a single source (e.g multiple headphones). It may, however, be used to combine various audio sources into a single output. The Amazon Basics 5-Way Multi Headphone Splitter is a fantastic example. 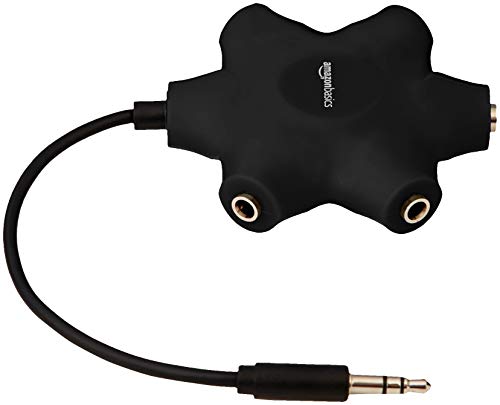 However, you must exercise caution since electricity from one gadget may flow back into another, causing harm to both. To put it another way, one may strive to drive each other insane.

Make sure the gadgets you’re using are low-power or have circuitry that prevents one from driving the other. It’s as simple as adding some resistance between each source and the splitter. However, the output loudness will be reduced, and the sound quality may be compromised.

Additional 1/8′′ connections are required for this top work, and the volume controls on the different things will be used to “mix.”

Using a Splitter Cable as a Third Option

A splitter cable, which divides the signal into two separate cables, is one option. A normal smartphone mic-earbud headset may be linked to independent audio-in and out jacks with just one port using these audio cables.

While these cords enable you to connect two audio sources at once, doing so may be dangerous. If you want to push maximum loudness, you may add a modest 10 to 30 ohm resistor in series to limit the current.

This fascinating device appeals to me. To me, it seems to be quite good. It contains two distinct 3.5m ports that are combined into a single output. Split audio systems are featured. It’s great for music or movies. Sound quality is excellent, the unit is stylish and tiny, and it is universally compatible.

With a 3.5mm male to 3.5mm female audio splitter, you may listen to audio from two stereo speakers or headphones on one portable device.

The cheapest and best approach is to use an external audio interface. If your computer does not have a built-in audio jack, you will not be able to use it. You’ll need two of these adapters in that instance.

You’ll also need two 1/8″ stereo TRS cables (aux cables) to connect to the input jacks in addition to the adapters.

However, you’ll still need a free sound mixer program to combine two audio sources and monitor the output to headphones while using these adapters.

A headphone jack adaptor, which transforms a single headphone connector into two, is another option.

A splitter cable or a headphone jack adaptor is included with most headphones with two audio sources.

If your headphones don’t come with one of these extras, you may buy them online or at your local electronics shop.

If you wish to play both audio sources at the same level, this is a fantastic solution.

The signals from both tracks will be amplified and combined by an amplifier. After that, the combined signal may be delivered to a single speaker or output device.

Option number eight is to use software.

Software may be used to merge two audio tracks into one. There are a variety of software solutions available, the most of them are free or extremely inexpensive.

Some software allows you to cut and fade audio tracks, while others only allow you to combine two tracks.

Using software to combine two audio recordings is quite similar to making a mixed CD containing music from several albums. You may import or “rip” music from CDs, then add effects such as cross-fading and equalization. 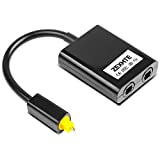 You may link one optical audio source to two audio signals with this device. In addition, it accepts one male input and outputs two females.

Option ten is to do it yourself.

You may now make this circuitry yourself if you have some familiarity with electronics. This arrangement is simple and just requires some basic electronics and op-amps. Transistors may also be used instead.

All you need is a single opamp (such as the 4556 or TLE2062) and some resistors to make an inverting mixer.

A symmetrical power supply is also desired, although it may be accomplished with a single supply.

In Windows 10, how can I combine two audio inputs into one?

Before we begin, a low-cost alternative is to connect line-out from one computer to line-in on the other. This prevents any ‘driving’ difficulties by allowing the PCs to share the same headphones.

A built-in function in Windows 10 enables you to merge two audio sources into one. If you want to view a movie or listen to music with someone else but don’t want to use two different devices, this might be useful.

This is how you do it:

1. Click the Start button and type “sound” to open the Windows 10 Sound settings. 2. On the Playback tab, next to the “Multiple displays” heading, click the “Combine” option. 3. From the drop-down menu, choose the input you wish to utilize. 4. Close the window after clicking the “Apply” button.

Users using multi-source headphones may listen to various audio sources at the same time, generally via two or more earpieces.

This enables users to listen to many audio sources simultaneously, such as music while conversing on the phone.

Multi-source headphones may also be utilized in the workplace, allowing one person to listen to a conference call while another works on a project.

There are two types of multi-source headphones:

However, interference from barriers or other electronic equipment in the region limits the loudness of wireless multi-source headphones. In addition, their frequency response is usually not as broad as that of wired variations.

Because there is no interference with wired multi-source headphones, they may be more dependable than wireless models. They don’t have a battery that has to be charged on a regular basis, and they generate better sound.

This is because their frequency response is not restricted by Bluetooth technology and may go above 20kHz. Wireless versions are frequently more expensive than wired counterparts.

What is the best way to combine audio from two computers?

Combining audio from two computers may be done in a few different ways. Using an audio mixer is one option. Another option is to utilize software that enables you to combine many audio files.

The first option is to use an audio mixer.

You’ll need two adapters, one for each computer, if you wish to utilize an audio mixer. The adapters will enable you to connect the two computers so that the audio files may be mixed. To connect the mixer to your speakers or headphones, you’ll also need an audio wire.

Option number two is to use software.

There are a few alternatives available if you wish to utilize software to combine the audio files. Audacity is a free program that may be downloaded from the internet.

GarageBand, which is included with new Mac computers as part of the iLife suite of software, is another alternative.

How to Make a Single Audio Jack Out of Two

There are many methods for combining two audio connectors into one:

The first option is to use a Y-cable.

A Y-cable is one option. There are three connections on a Y-cable: two for audio jacks and one for the microphone jack. This cable equally distributes the signal between the two audio connectors.

Using an Adapter as a Second Option

Using an adaptor to connect two audio jacks is another option. A 3.5mm stereo adapter or a 6.3mm stereo adapter are two examples of adapters available. These adapters enable two distinct kinds of audio cables to be connected together.

The third option is to use a splitter.

There are a few internet options for combining two audio sources into one. Using an online mixer is one option. Another option is to utilize an audio editor that is available online.

Mixer for the Internet

An online mixer is a web-based program that lets you mix two or more audio recordings together.

This is helpful for podcasting, remixing, and other applications. There are a number of online mixers to choose from, so do your homework before making a decision.

Another technique for mixing two audio tracks is to use an online audio editor. You may usually alter individual songs as well as the overall mix using this sort of editor.

Some editors also let you apply effects and make other changes. Make sure you do your homework before hiring an editor.

Try it out now that you know how to merge two audio sources into one headset. This might be a terrific way to personalize your audio experience, and it’s particularly beneficial if you want to share music or a movie with another person.

Just make sure you’re using headphones with individual volume controls for each audio source so you can change the settings individually.

Can you connect two audio sources to headphones?

A: Yes, you can connect up to eight audio sources and one output source.

How can I use one headphone with two devices?

A: To use one headphone with two devices such as a bluetooth pair, you need to unpair your headphones from the first device and then turn them on.

How can I listen to audio from two sources?

A: You can either use a splitter cable or a Y-adapter.